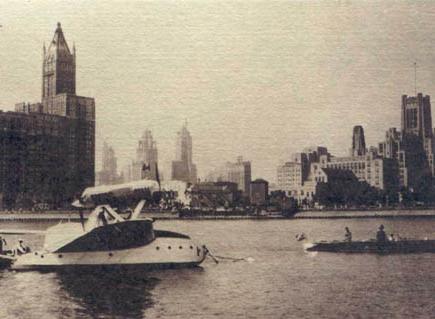 Who the Heck is Balbo?

Coming from a number of years living in Washington DC, I don’t want to discontinue replacing street names by their grid-appointed numbers.  I just find it easier to say “South 7th and East 1st” than the names added on later. And I certainly mean no affront to gestures like christening South 22nd St. “Mayor Anton Cermak Rd.” in honor of our former felled mayor who took a bullet in 1933 instead of a visiting FDR.

Translation?  Balbo and Michigan.  Chicago street names are suffused with not one, but two historic origins.  There are the “Honorary Street Names” in brown just above the traditional street names, and the more prominently and (sometimes) rationally named streets in green. You’ve seen them but probably not heard of them on our architectural tours of Chicago.

While a street named after one of the Balaban [& Katz] Bros, architects of movie palaces across early 20th century Chicago, could be a good idea, we do have some interesting stories behind other street names. For example, we got a column from Ostia, Italy and a street named after a Fascist Italian Air Force General.  Say what?!

While much of the history of Italo Balbo’s historic trans-Atlantic flight and grandiose arrival to Chicago’s 1933 Century of Progress is covered in extensive detail in and around excellent Chicago-centric web resources, I would like to encourage you, dear readers, to go exploring—away from your computer and phone screens!

Balbo’s column is just south of Soldier Field near Burnham Harbor.  We briefly glimpse it on the Chicago Highlights Detour 101 Bus Tour. But there is an even more peculiar gift than the twenty century year-old Ostian column that Il Duce & Balbo gifted to Chicago a year later in 1934 and dedicated “via satellite shortwave radio(!)” to throngs of Italian-American Chicagoans in their Sunday finery.  The great Sioux Nation Chief Blackhorn, who was on site at the World Fair when Gen. Balbo landed, crowned him honorary “Chief Flying Eagle.”  I have to believe this headdress exists somewhere deep in the basement of some institution or private collection. Any ideas, Chicago Detours fans?