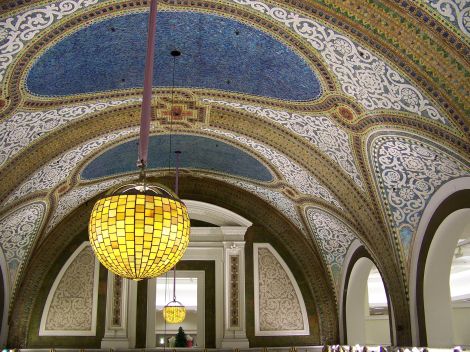 The wholesale trade-show, the Chicago Market is about to begin, where buyers from around the world will shop for gifts and home products in the Merchandise Mart. As it opens up in the coming days, we are served with another reminder as to how the Midwestern approach to home life is promoted throughout the country and the world. The first, and best, example of this of course is Marshall Field & Co., the creators of the modern department store and purveyors of Midwestern taste. Field & Co. actually built and owned the Mart before selling it to Joseph Kennedy in 1945. Field’s revolution in how merchandise is marketed and displayed had vast repercussions on business, fashion, cooking, house wares, and plenty else, and it is important to remember that this paradigmatic change in how we do business stems from an eye for design that was once laid out on State street.

On our Loop Interior Architecture Walking Tour, Chicago Detours takes guests through the building and gives a sense of what the space must have felt for first-time visitors, but I think that to a certain extent it is hard to try to imagine that what we normally take for granted in Macy’s or Bloomingdales was in fact quite novel when Harry Gordon Selfridge took over the retail store in 1887. We are so used to a department store looking the way it does – looking the way Field & Co. designed it to be – that it appears regular, not particularly out of the ordinary. One might say that the way we shop is the way Field & Co. made us shop.

The Chicago Market bills itself as “Midwest taste for lifestyles everywhere,” and that seems to be applicable to Marshall Field’s as well. The retail store served middle class housewives and Texas oil barons, movie stars and matrons. It was designed to be a place where people could mingle. This is not to say that it was a place where the rich and poor rubbed shoulders, but the building, built in 1916, was designed to be open and expansive. It has high vaulted ceilings and rows of arches under which displays of goods sit, much like a church, especially with the glittering mosaic of Louis Comfort Tiffany. Whether or not any of the customers were actually interacting, the constructed space of Field’s interior gave a kind of feeling of togetherness. It still does, in fact. Take the bus or train downtown and walk through the building again some Saturday afternoon – perhaps going downstairs for a Frango mint or two – you will find that you can feel a calm that joins you with those other customers searching for gifts for parents or new clothes. Perhaps it is a sensibility that is particularly Midwestern, now to be seen throughout America and the rest of the world.